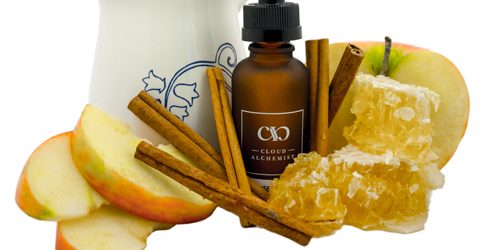 Promised Land was one of those flavors that I had been previously asked to review by several people. As a result, Cloud Alchemist had been on my list of vendors for the next round of juice purchases. I was having a hard time keeping up with vendor submissions, so getting to a point when I could make the purchase while still ensuring I’d be able to stay on top of what I had waiting for review, was not easy. Within my local vaping group I had heard about a new store selling vaping gear. I don’t usually find the kind of things I need at these local shops. This part of the country isn’t exactly a vaping mecca like Southern California.

I’ve only once seen a local shop carrying the high discharge batteries I prefer. It’s rare for me to find the re-building gear I need or even quality 510 drippers I use on my ProVari rig. Nevertheless, I usually feel obligated to check these stores out. If they are good people, in it for the right reasons, and selling merchandise at a reasonable markup, I usually buy something to patronize the business and help them to grow into a successful shop.

So it happened that I walked into this combination tobacco/vaping store one day, only to stumble upon a rather large selection of Cloud Alchemist Vapors juice, including this one, Promised Land, the juice that’s been on my list for quite some time now. I took full advantage of the small tasting bar they had set up, even if it meant using a cartomizer for the first time in at least 18 months. It was then and there that I had my first taste of Promised Land.

The most dominant flavor in the profile is a very smooth, very realistic clover honey that presents immediately on the inhale, providing a sweet creamy foundation for the other flavors to play off of. With a hint of creamy cinnamon in the profile, particularly at high wattage, I suspect there is also a bit of red apple in the mix, lending the honey some additional depth and character. That sweetness I taste could be coming from a cinnamon flavor concentrate, but I’m betting fairly heavily, that it’s an extra apple note.

Following the robust honey/cinnamon complex flavor, there is a combination of coconut and caramel, both presenting right at the top of the exhale. The cinnamon, which is where I suspect that boozy overtone was coming from, is a higher-toned version rather than the creamy style. The apple is of the light sweet variety, almost coming off as a Granny’s gooey cinnamon rolls or Sticky Buns Cinnamon Honey Cream type tone.

These two flavors compliment the honey beautifully, adding a level of sweetness, and while I’m not sure what exactly is in this juice, it’s such luscious taste that it would serve particularly well as an ADV.

It doesn’t seem cloyingly sweet either, more like the kind of decadent clover honey blended with rich and flavorful cinnamon, like the desserts offered at high-end, high-priced restaurants. At times, there is an apple tone to the profile. Neither is high enough to turn off those vapers who tend to dislike those types of flavors. They are distant background notes, used to enhance the primary components rather than act as individual flavors.

In the ProVari/510 dripping atomizer rig, I preferred to keep this juice on the cooler side, settling in at 9.2w or 4.8v on a 2.5Ω atty. This produced an excellent balance of flavor, good throat hit, and a huge cloud. In the Duke/Helios rig, I found the greatest balance of flavor at ~32 watts, with the AFC half open. This produced an intense amount of flavor, a slightly stronger throat hit, and the requisite cloud that accompanies almost any juice at that wattage.

The final prominent component in the profile is one of my favorites, a yummy flavor that works with so many different flavoring components that I’ve seen an awful lot of it lately, graham cracker. Just a perfect premium e-juice.

A little change here. The honey is more prominent and a lot better on inhaling and on the exhale the honey was a bit lighter. The caramelized apple flavor is bit stronger than before.

The Honey Cinnamon Creme crust flavor that is in Promised Land is remarkably accurate without seeming the least bit artificial, and the whole juice has a nice creamy mouthfeel. It perfectly simulates whipped cream with a caramelized apple topping. While the juice lacks a significant throat hit, it still has excellent vapor production, The dead-on accuracy of the flavor helps make up for the missing TH. If not an all-day vape, it certainly earns a spot in the after dinner rotation.
Grab this best e-juice!