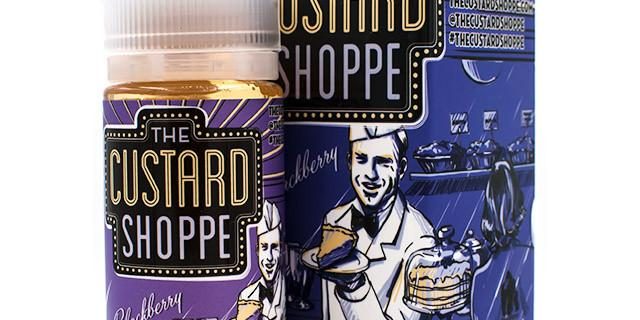 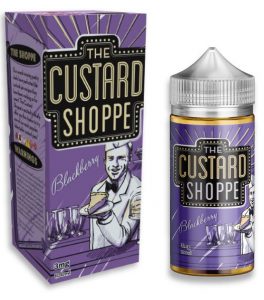 suitable for vaping all day long. It is arguably the best e-juice among the three flavors released by The Custard Shoppe.

The Custard Shoppe Blackberry tastes just like a blackberry custard pie. You can even taste the pie crust when you are vaping this e-liquid. This e-juice is sweet, but it is not as sweet as The Custard Shoppe’s Raspberry blend. When vaping this e-juice, you will pick up the taste of pure blackberry flavor on the inhale. On the exhale, the custard flavor comes out and mixes nicely with the blackberry flavor. The custard flavor in this blend is very rich. The way the producers of this e-liquid were able to perfectly capture the taste of blackberry and custard is quite impressive.

Like other e-liquids from The Custard Shoppe, you need to steep this Blackberry e-juice blend to enjoy the flavor at its best. Two to three weeks is more than enough time to steep an e-liquid. Steeping is essential for all the ingredients used to make an e-juice to mix up properly since they have different densities.

Blackberry by The Custard Shoppe has a vegetable glycerin (VG) and propylene glycol (PG) ratio of 75/25. You can vape this e-juice from either a sub ohm tank or RDA, and you’ll not be disappointed with how it tastes. This Blackberry e-liquid is easy on coils. It does not gunk up coils, and you can switch between flavors when vaping it without any lingering flavor. What’s more, this e-juice performs well at high wattage. The vapor production of this e-juice is grand. You will get abundant clouds of vapor from each hit. If cloud chasing is your thing, then you will love vaping this one.

The Custard Shoppe’s Blackberry e-juice comes with varying nicotine strength levels. You can get this e-liquid with 0mg, 3mg or 6mg of nicotine. You can tell that the e-liquid was made with high-grade nicotine because you will not get any harsh sensation in your throat when vaping it. At 3mg, the throat hit of this e-juice is 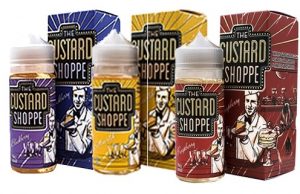 weak. If you want a stronger throat hit, you are better off going for 6mg of nicotine.

This Blackberry e-juice comes with the usual packaging design that The Custard Shoppe uses for their e-liquids. It is packed in a 100ml chubby gorilla unicorn bottle. There is a colorful label on the bottle which features The Custard Shoppe’s logo. Overall, the packaging design of this e-liquid shows you that it is a premium product. You will not have any problems filling your tank or dripping on your coils directly from the bottle.

The Custard Shoppe is an e-liquid series that was inspired by classic London bakeries which are known for producing delicious custard pies. The e-juice line is produced by Vape Storm Labs, the same company behind the top-selling Jam Monster e-liquid series. If you have tried any Vape Storm e-liquid or any e-juice in the Jam Monster series, then you know what to expect from The Custard Shoppe. All Vape Storm e-liquids are produced in-house with ingredients sourced from US-based suppliers.