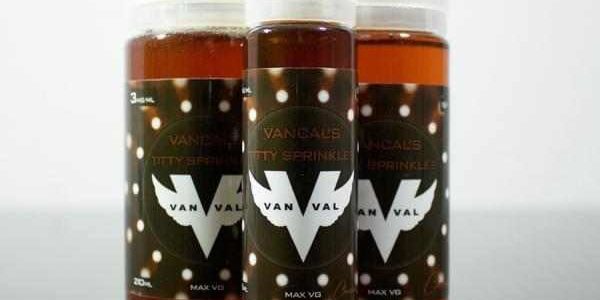 Like many other e-liquids from VanVal Vapor, VanCal’s Totty Sprinkles has a very interesting name that does not give you any hint of what the blend tastes like. This e-juice is based on the flavor of a fresh fluffy donut with chocolate glaze and white chocolate cream topping. It has a sweet sugary taste that will capture your taste buds. If you love sweet dessert flavors, then you need to grab a bottle of VanCal’s 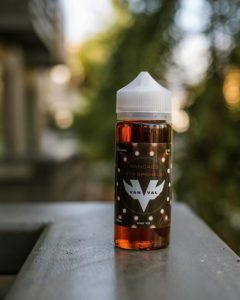 Titty Sprinkles. The flavor of this VanVal Vapor e-liquid is not very intense. It is an all day vape. You will not get sick of this e-liquid flavor.

If you buy a bottle of the VanVal Vapor e-liquid and you are not impressed by its tastes, you can give it some time to steep. VanVal e-juice blends are usually shipped fresh made from the factory, so steeping is necessary to allow the ingredients mix well. Steeping works best for e-liquids that contain nicotine. This is because nicotine contributes to the oxidation of the flavors. Two weeks is enough time to steep this e-liquid, but you can let it steep for longer. You will notice that the e-liquid will get a dark brownish color as it steeps.

Like all other e-liquids from VanVal Vapor, VanCal’s Titty Sprinkles has a vegetable glycerin (VG) and propylene glycol (PG) ratio of 80/20. You will savor the taste of this blend whether you choose to drip it or vape it using a sub ohm tank. VanCal’s Titty Sprinkles is not a coil killer, which is remarkable since it is very sweet. The vapor production of this VanVal Vapor e-liquid is colossal. You will get gigantic clouds of thick vapor from every hit especially when you are vaping at a high wattage. 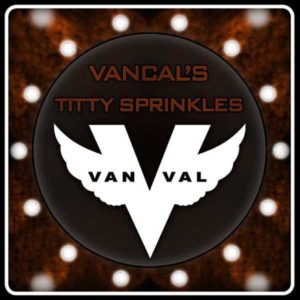 nicotine. The intensity of the throat hit that you will get from vaping this e-liquid depends on the nicotine level that you select. Most vapers can get a satisfying throat hit from 6mg of nicotine or less. However, if you were a heavy smoker, you may need to go for higher nicotine levels to get a good throat hit.

VanCal’s Titty Sprinkles comes with the same classic packaging design that VanVal Vapor uses for all the e-liquids in its collection. The e-juice comes packed in a clear plastic bottle. You will find a label on the bottle which features the VanVal Vapor logo. The label also contains some information about the product like its batch number, nicotine level, and more. You can easily fill a tank or drip on coils directly from the bottle. VanVal Vapor recommends snipping off the tip of the bottle sprout if you want the e-juice to flow better.

VanVal Vapor is one of the renowned producers of high quality and affordable e-liquids in the US vaping market. This company, which is based in Montana, makes some pretty flavorful e-liquids. All the e-juice blends from VanVal are made of pharmaceutical grade ingredients and NicSelect Nicotine. Currently, the company has two e-liquid lines in its collection namely 7 Chakras and August 8th. VanVal Vapor also has a vaping mod which is known as the Chakra Mod.